Family Friendly, Things to Do, Western Experience
Posted May 30, 2015
By Josie Villa-Singleton

Plan your Stockyards Adventure around the cattle drive, which occurs every day at 11:30 a.m. and 4:00 p.m. Don’t miss real Texas cowboys drive a herd of longhorns down Exchange Avenue in the heart of the Stockyards. Each drover carries Fort Worth Herd trading cards with information about each steer and you can collect up to 20.

The Stockyards Historic Walking Tour provides fascinating insight into the history of the Stockyards, leaving you with a greater appreciation of the area. You can schedule a Stockyards Historic Walking Tour Tuesday through Saturday at 10 a.m., 12 p.m. or 2 p.m. (2 p.m. tour only happens if four or more guests attend) and Sunday at noon or 2 p.m. Your tour begins with a viewing of the film “Spirit of the West,” which overviews the Fort Worth Stockyards and it’s role in the cattle business. The 10 a.m. tour ends just before the first cattle drive. 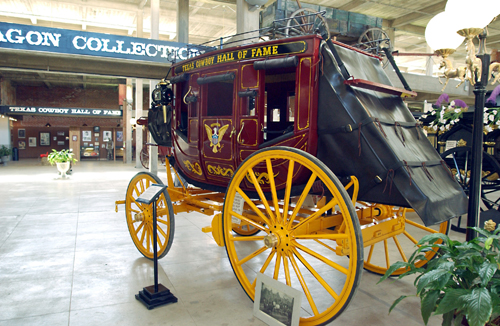 Continue your historic exploration of the Stockyards by visiting the Texas Cowboy Hall of Fame and the Stockyards Museum on your own. The Texas Cowboy Hall of Fame highlights individuals who exemplify the Western spirit and features over 60 horse-drawn vehicles, making it the world’s largest collection of wagons. There’s plenty for kids to explore with several interactive exhibits that show what goes in a chuckwagon and how Cowboys packed for the trail. The Stockyards Museum housed inside the Historic Livestock Exchange Building exhibits interesting artifacts related to Fort Worth's early days and the Stockyards.

Commemorate your day with a souvenir photo on a bull at Billy Bob’s Texas. The photo can be taken at any time Monday through Saturday from 11 a.m. to 5 p.m. or Sunday from noon to 5:00 p.m.

Josie Singleton and her family love seeking out adventure whether it's in the Atlas Mountains of Morocco or the natural prairie lands of Tandy Hills Park. Though their travels have taken them all over the world, they've learned that there's no place like home, here in Fort Worth.

Josie is a Fort Worth native and loves sharing all her favorite things about the city with her family and readers of her blog, Eat This Fort Worth. Josie created the blog to bring attention to all of the great local eateries in and around Fort Worth and to encourage readers to support local restaurateurs. Josie also writes about food for local publications such as Fort Worth Foodie and 76107 Magazine.

Josie and her husband, Russ, are passionate about cultivating an appreciation for the outdoors in their two sons, Aidan and Ignatius. Her favorite family friendly activities include biking on the Trinity Trails, slacklining wherever they can and hiking at the Fort Worth Nature Center. Their go-to family friendly dining spots include Thailicious, Tokyo Cafe, Spiral Diner, Cafe Brazil and Rodeo Goat. Follow Josie's food blog at eatthisfortworth.com